„Berlin leuchtet“ and „Festival of Lights“ – illuminate the Berlin nights

Soon they will have burned up – the colourful autumn lights of the “Festival of Lights” and “Berlin shines”. With light shows and spectacular projections – that’s how Berlin currently secures the crowds of visitors and tourists until the cooler season! 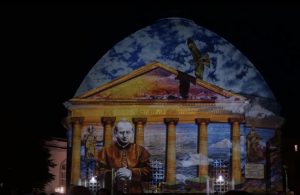 This year it was especially beautiful! Too bad that it is almost over now. Every autumn, when the evenings get dark earlier, it’s “Lights on!” by the mayor Michael Müller, who opens the famous Festival of Lights.

With original projections and LEDs, the landmarks in Berlin are attractively staged.

In addition to the Brandenburg Gate, the TV Tower or the Victory Column, more inconspicuous squares, streets, cinemas, museums or hotels are also immersed in the sea of lights.
Thanks to artists and organisers from Germany and abroad, Berliners and visitors can experience unforgettable highlights every year. Every year with more than 2 million visitors it is an almost overcrowded highlight of the city.

In the run-up to the event, rebeam itself took care of the cleaning and maintenance to ensure that some of the projectors used were able to show their best performance.

Behind the whole event is “Berlin shines”, the association for light art and creativity and the “Festival of Lights”.

The festival’s motto this year is “Connecting Cultures” and can only be admired until 14 October. Visitors can get to know the city centre on five different light routes.

We also mixed with the crowd and can say: Absolutely worth it!