Under the motto “beam away fascism” opponents of the Nazi march gathered on the 80th anniversary of the Progrom Night in Berlin Mitte.

Powerful projectors with projected slogans and pictures were to decorate the walls of the houses and thus express the political opinion of the demonstration. rebeam used a Panasonic PT DS20 and various lenses such as ET-D75LE10, D75LE 5 and D75LE3.
The demo train was a risky counter-demo and outnumbered the Nazi march. The big challenge was to select suitable projection surfaces in the surrounding architecture in fractions of a second to adjust the projector’s own focus as well as the image height with the lens shift.

The lens change was quick and on the fly at a height of 3 meters on a moving truck for exciting balance exercises, especially since the frightening proximity of the tram overhead lines still had to be taken into account. 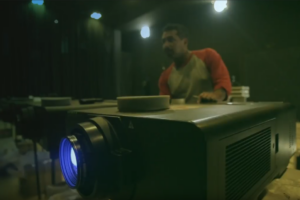 rebeam was official supplier of AV technology at the XI[...]