Powerful and indestructible – The trend has been apparent for many years: superlative projectors have set new standards on the projector market.

Powerful and indestructible – The trend has been apparent for many years: superlative projectors have set new standards on the projector market.

The previously forecast market share of 20 percent for 2018 should have long been surpassed in Germany – time to take a closer look at the new projectors. How suitable are the new laser projectors compared to those with traditional lamp technology (xenon, UHP and Hg-steam)?

In recent years, the beamer market has not only changed to higher resolutions such as 4k and perhaps even 8k in the future, but also to a new technology – that of laser technology. Lasers have been used in projectors since 2002, and in the last five years they have been the highlight and focus of projectors measurement. For example, manufacturers replaced traditional lamp-based light sources with SSI – Solid Shine Illumination lighting technologies, which was demonstrated not least at the last major trade fairs in Las Vegas and Amsterdam. The laser light sources in the professional projection environment surprised at first with their performance, today the semiconductors as light sources have long been the main focus of development at Panasonic (Solid Shine Laser), digital projection (HIGHlite series) or Christie (Christie Mirage 4KLH).

In the coming years, halogen mercury and xenon lamps from DLP and LCD projectors will gradually be replaced by laser-phosphorus light sources.

But lasers are not only used in classic projectors. Industrial laser projectors have been used as optical guidance systems since around 2002. These make it possible to dispense with templates in manufacturing processes, since they indicate the correct position directly on the workpiece to be machined, for example during welding and assembly.

The laser phosphor projectors convince so far by their stable projections which is possible by their even light output. The name of this technology comes from the combination of lasers and laser diodes, which produce the primary colors red green blue by means of a phosphor wheel.  Laser phosphor projection is already used in educational and government institutions. The advantage of this design is undoubtedly lower maintenance and the associated low operating costs due to its long service life. To find so far with manufacturers such as Sony (VPL-FHZ65 ), Nec (NEC NC1100L) or Panasonic. These projectors create about 6000-30000 ANSI lumens. For the distant future, even ultra-high-resolution laser-phosphorus projectors are to be expected. A 50000 ANSI lumen projector has already been announced for 2020.

The devices are more durable and compact. Overall, one should be prepared for lower light output, i.e. do not expect more than 2000 ANSI lumens. The colour rendering, on the other hand, is positive. Picture quality: perfect, wide colour spectrum, natural colours and sharp grey gradations. Because no colour wheel is used here, colour flickering cannot occur either. So far, Panasonic, Digital Projection, projectiondesign and Christie have shown convincing examples. 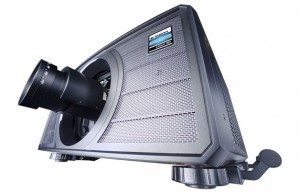 The hybrid projectors also work with LED technology. However, they are real professional LEDs and laser diodes that produce the green light colour thanks to a blue laser diode and a phosphor wheel. The light output reaches a strength of up to 30000 ANSI lumens. In practical use, on the other hand, the technical design repeatedly leads to brightness reductions and other complications, so that this technology is not yet profitable. Examples are Sony (Core XJ-V100W), Panasonic (PT RW330), Optoma (ZW212ST).

The high-power RGB lasers are currently used in the premium cinema sector; they are ideal for high brightness and oversized screens. The projectors have a massive weight and are more voluminous in the housing. Up to 75,000 ANSI lumens are currently possible in a 3-chip DLP device, and manufacturers such as Barco and Christie have already presented this impressively. A 60,000 ANSI Lumen RGB laser projector from Barco can be seen in action at the Imax cinema in Berlin. 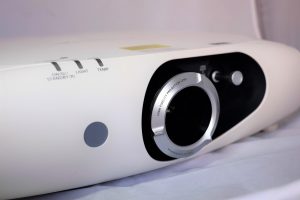 Many manufacturers strive for a rapid further development of their laser projectors and have many models and model series at trade fairs for demonstration. These include Digital Projection (Insight 4K Quad series), Sony (Sony VLP-FH55), Epson (L series) and Panasonic (1Chip DLP and 3Chip DLP) in the Solid Shine category.

1. If a conventional lamp has to be replaced after 1500 to 6000 because half of its luminosity is lost, lasers can be used for 20,000 operating hours without maintenance. The Epson LS10000 even has a lifetime of 30,000 hours.
2. Lasers and LEDs not only save maintenance costs, but also electricity. They are more energy efficient thanks to their lower operating temperature.
3.In this context, it is also positive to note that lasers and LEDs do not operate at full light output if the projected image content does not require it. This increases the contrast range of the projector, allowing for a more dynamic picture life.
4. less waste heat and fan noise, the ambient temperature can remain almost constant, allowing for placement in the middle of a crowd.
5. laser projectors are ready for spontaneous use: They do not require a certain warm-up time and also do not have any cooling phases (until now, cooling always also means: connected to the power supply).
6. consistently bright and color-intensive images. Very high colour spectrum reproduction, even modern compact laser projectors in the home cinema range can reproduce all colours, whereby their colour spectrum and luminosity are considerably better than with traditional devices. Laser projectors for home entertainment have been available since around 2015.
7. less pollutants. Xenon short-arc lamps or small mercury halide lamps have considerable risks: Not only high temperatures, but also heavy metals (problematic transport and difficult disposal).

Because laser projectors convince in the most different ranges due to their various advantages, but nevertheless the higher price may not remain unmentioned. This also applies to spare parts. Of course, the prices always correlate with the required brightness. For example, a 5,000 ANSI laser beamer fits into the financial budget of a university, the 12,000 ANSI lumen beamer fits into the financial framework of an event organization. In order to meet the price of the laser projector, one must offset the saved lamp and maintenance costs.

Currently it is clear that the numerous application possibilities, the convincing performance and the reduced operating costs make the laser projectors so attractive. They will increase productivity in many areas and open up new market opportunities. In the long term, more and more laser beamers will be in demand in the AV mainstream. Despite the proven performance of lamp-based projectors, these devices will not disappear overnight, but the market is becoming more demanding. How rapid the developments are can be observed at the current trade fairs in many places.

If you use your beamer more than 8 hours a day, you should consider the laser projectors as a cost-saving alternative. If, on the other hand, you use your projector 2 hours a day or less, i.e. about 500 hours a year, you do not need a laser that lasts 20,000 hours, which corresponds to 40 years. Here it is much more worthwhile to change to a brighter or high-resolution lamp projector instead of accepting the surcharge of a laser projector.