rebeam was official supplier of AV technology at the XI South American Games in Cochabamba 2018, thanks to David Peralta, Managing Director of visuals. The South American Games 2018 are the major sporting event in South America! It was a great experience for all involved ! Jota, Paco and Rene from United VJS remember with us:

Jota: “I was just with the company rebeam in Orlando at a fair about AV technology when I received the call from David Peralta. That was 8 months ago. David told me what kind of project he was looking for. We started to put everything together for the project, David and I… We thought about what was needed, what people, what technical equipment, etc.”.

The whole process up to the finished projections was a collaboration of three companies, one German, one Brazilian and one Bolivian.  A large video mapping was also planned. The creation of this mapping took place in several steps, which brought a rich experience to all participants

Jota: “By the way United VJS (Visual/Video Jockeys) was created, Rene Aguilar and also Paco Aguilar were added. So we gradually formed a group in which we could support each other and exchange ideas“.

There were discussions about a suitable projection location. Visits were made on site to determine all the conditions and to see how the stadium was set up. Everyone worked well together at a high international standard.

Paco: “It was the first time in Bolivia that a video mapping of these dimensions was made and with this power. Although in Bolivia video mapping has evolved over the last ten years in small steps, a show of this size had not yet been attempted! A big technical challenge was to find the large amount of bright projectors.”

We worked with 20 thousand Ansi-Lumen devices from Panasonic (Panasonic PT DZ21 K /E/U). Furthermore, the signal connection system was very ambitious for such a project. It is difficult to draw signals from one side of the stadium to the other. Also the luminosity of the projectors had to be well balanced. In the end, everyone succeeded in putting on a fantastic show!

Rene: “The most important thing about this project is the people, we really put together a very compact and very dynamic team. And everyone was prepared to give 110 percent of themselves.”

A video mapping culture that already fascinates people all over the world had to be tried out there in Bolivia. And it was a success! 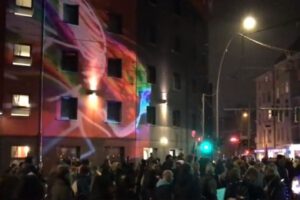 rebeam supports actions against right-wing populism in Berlin with big[...] 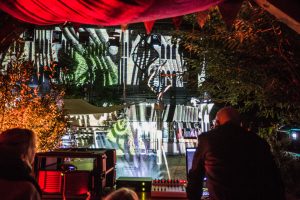 Every year, thousands of people in Berlin marvel at the[...]